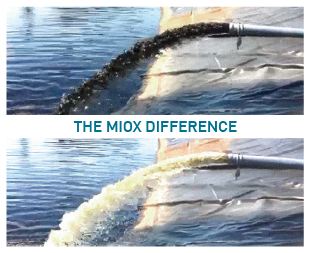 The chemicals used for treating for hydrogen sulfide (H2S) in the oil and gas industry can sometimes be just as hazardous as the H2S itself. MIOX wants to eliminate these hazardous chemicals and let oil & gas companies create their own safe chemistry on-demand as they need it. Whether it is high volume treatment, or low volume treatments in the middle of nowhere with no resources, MIOX’s sodium hypochlorite generators will meet your needs.

MOS breaks down odor causing compounds, such as phenols or organochloramines and remove the musty odors of geosmin and methyl isoborneol (MIB) caused when water sources suffer from algae blooms.

With sufficient dosing, MOS does not require a detention tank, filter system, and head can be maintained from the wells to distribution.

MIOX systems require only ordinary food grade salt, eliminating the transportation, handling, and storing of hazardous chemical.  Employees do not need to wear protective gear, and there are no storage compatibility issues.  Since the solution is stored and injected into flowback and produced water at less than one percent concentrations, the oxidant solution is not considered a hazardous material, but rather an environmentally benign yet highly effective chemical.

Table salt (NaCl) is mixed with water to create a brine solution. This brine is then passed through MIOX’s proprietary equipment which applies an electric current, creating a Mixed Oxidant Solution (MOS). This electrolysis process results in a Mixed Oxidant solution that is dilute enough to impose no Health, Safety or Environmental concerns. (See video below)

When compared to other chemicals, such as conventional biocides, we dramatically reduce exposure on-site. No special clean-up or spill procedures, or potentially expensive air quality testing needs to be observed with MIOX Mixed Oxidant Solution chemistry. 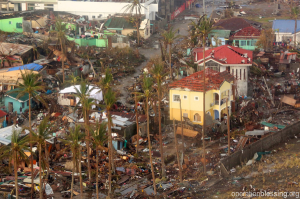 MIOX Corporation, the industry leader in on-site chemical generation technology, has partnered with Operation Blessing International (OBI), one of the largest charities in America, for disaster relief efforts in the Philippines following Super Typhoon Haiyan.

MIOX President & CEO, Craig Beckman, said, “We are honored to partner with Operation Blessing in its efforts on the ground in the Philippines.  At our core, MIOX is about safe water disinfection and clean drinking water.  Everyone wants to help in times of great suffering, and we are glad to be a central part of Operation Blessing’s strategy in Tacloban.” 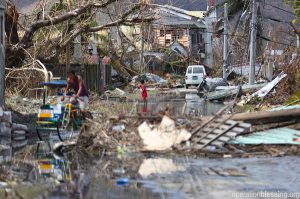 Operation Blessing VP of International Operations, David Darg, is on the ground in Tacloban, Philippines preparing for the arrival of the portable sodium hypochlorite water treatment systems. David, who has been a first responder to over 100 natural disasters globally, says the level of suffering in the Philippines is among the worst he has ever witnessed.

“There’s a tremendous amount of aid that is ready to pour into the country, but the port was destroyed and the local infrastructure severely damaged,” said Darg. “This is making the transportation of aid to the hardest hit areas near impossible.”

According to Darg, the most important thing right now is to provide clean water.

For more information or to donate to the relief efforts, please visit http://www.ob.org/

Operation Blessing International began working in the Philippines in the early 1980s by pioneering fresh water programs to the residents of the trash dump known as “Smokey Mountain.”   In 1996, Operation Blessing Foundation Philippines was created and has worked to fight hunger, disease, unemployment, illiteracy, abuse, and to respond to major disasters ever since. Under the direction of Dr. Kim April C. Pascual, Executive Vice President and Chief Operating Officer, more than a million Filipinos have been helped through various humanitarian outreaches spearheaded by OB or in collaboration with OB partner agencies such as non-profit organizations, local government units, the Department of Health, the Department of Social Welfare and Development (DSWD), and the Armed Forces of the Philippines. In recognition of OB’s efforts, it was awarded as NGO of the Year for Peace Efforts by the Philippines government in 2002 and 2003, and as NGO of the Year in 2006 and 2007.

Operation Blessing‘s VP of International Operations, David Darg, is on the ground in Tacloban to bring relief to typhoon victims.  In just a matter of days, David will have a number of portable hypochlorite generators and will start distributing clean drinking water to survivors in Tacloban and other affected areas in the Philippines.  Right now, food and water are critical for survivors. Many have now gone days without either as aid workers and military personnel work to reach those trapped in devastated areas.

Watch the video below as David explains how the families in the Philippines are struggling to survive in the wake of one of the strongest storms in recorded history.

MIOX is a cutting-edge technology company that has been making water safe to drink for twenty years. Many communities are turning to MIOX chemistries for their drinking water disinfection because the chemistry is a proven disinfectant for improving the quality and safety of drinking water with significant economic savings. MIOX’s extensive experience providing clean, safe drinking water ranges from rural communicates to large cities with more than 10 million people such as city of Bogota, Columbia.

Around the world, MIOX products are providing reliable access to safe drinking water. By providing advanced disinfection technology, government agencies, NGOs and relief organizations have used MIOX systems to provide water purification in disaster relief efforts in New Orleans after Hurricane Katrina, the tsunami in Sri Lanka and Thailand, floods in the Mexican state of Tabasco and after devastating earthquakes in Haiti. MIOX systems have proven effective in Haiti, Honduras, Africa and other remote settings where access to clean drinking water is crucial but unavailable.